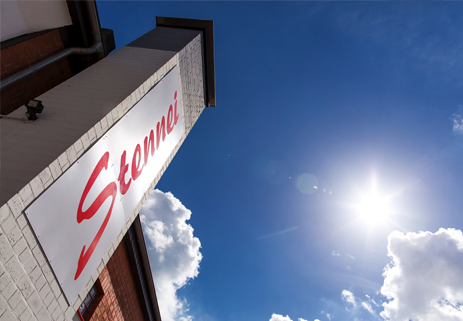 The company Stennei Antriebselemente GmbH was founded in 1960 and started with 3 employees in Essen as a represent of a former dutch producer for V-belt-pulley.

1960 we started with 2 key-notes which do still exist:

Questions at power-transmission? - Ask Stennei!
We deliver if necessary in a few hours!

As a pioneer Stennei established already in 1982 business contacts in China and produced as one of the first companies drive elements of high quality with chinese partners.

Turn-over was growing and so we had to invest into more machines and new halls.
So we still produce in Duisburg mainly special-parts regarding to customers drawing as well as additional work like drilling, grooving, balancing at customers orders.

Today Stennei GmbH is owner of one of the biggest stocks for mechanical power transmission elements in Germany.
Totally our stock is more than 2.500 Euro-Pallet-Places in order to fulfill your orders in shortest time.

At time Stennei GmbH has 45 employees and is a job training company for the following professions: industrial mechanic, metal cutting machine operator and warehouse logistic specialists.

We use cookies on our website. Some of them are essential for the operation of the site, while others help us to improve this site and the user experience (tracking cookies). You can decide for yourself whether you want to allow cookies or not. Please note that if you reject them, you may not be able to use all the functionalities of the site.